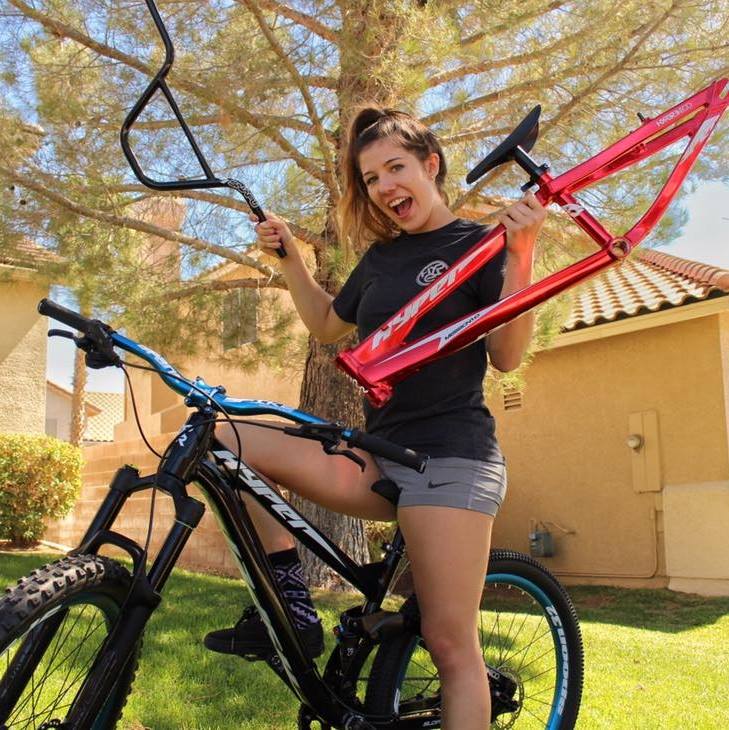 Born in Henderson, Nevada, Jordan Scott at 5 years old knew she had a love for bicycles and sports. Her parents had taken her to the local BMX track to see if she would like to race and she has never looked back.

Today Jordan Is considered one of the premier women athletes in the sport of BMX. Her love of bicycles has taken her all over the world in compettions and riding. She has dedicated her life to the sport she loves so much and is on track to representing the United States of America in the Olympics for Bicycle Motocross. Jordan’s passion has allowed her to make friends with so many riders and fans throughout the world. She is considered by her competition as a fierce competitor but an excellent sportsman and friend. Jordan truly enjoys the opportunity to represent her sponsors and her team in local and national events.

Jordan’s rise in the BMX community began through racing in the ABA and NBL local and national events. She competes and rides local races every week while a+ending national sanctioned events monthly and training at the Olympic Training Center several times a year. She has ridden and competed in BMX, Mountain Bike, Dual Slalom and Dirt Jump competitions and is constantly expanding her capabilities with training and competing in different aspects of bicycle competitions to make her the most well rounded athlete she can be. She competes and participates in triathlons as well as swimming and surfing. When she is not training, she is riding bicycles for the pure love of the sport.

Considered as one of the most versatile girls on a bicycle, Jordan is comfortable in the air, on the track or in front of a camera. She has grown very fond of talking to her fans and representing her sponsors at events and through social media. Jordan has began mentoring and coaching younger racers and riders at events and in her local race and ride spots in Henderson, NV. She truly loves what she does and looks for ways to give back.

In 2008, Jordan had really begun to take off and her skills at such a young age were apparent to her family. With her brother who she considers her best friend and training partner, and a very supportive family and friends, Jordan decided to chase the coveted title of National Age Group Champion in the ABA National Tour. Racing every weekend with her brother across the USA, Jordan has accomplished numerous world and national titles at the young age of 14. She is most-proud of her World Champion status in the Girls Challenge Class in 2011 & 2014 as well as her National Number 1 title she has earned in 2013. Jordan’s passion for racing bicycles is only the beginning to this talented young athlete. Training with her coach Olympian Connor Fields, she has big dreams to be a champion, a gold medal winner, and a representative to the sport and the industry.

The love of the bicycle and riding has taken Jordan to new levels that most in the sport have not had the success in crossing over to. Riding with her friends and fellow racers, Jordan was introduced to a different form of the sport years back. Her love of racing and fearless ability has taken her to the sport of BMX in the street and in dirt jumping. At first, she would ride with the boys who would doubt her, but soon, the same boys began teaching the talented young rider how to ride the skate parks and bowls. Next she tackled dropping in the big bowls and jumping the spines that separated them. She found she was equally talented in the dirt jumps as well.
Jordan is a annual supporter and rider of the Woodward BMX program . This was where she truly began to shine with riding outside of the race track. She has learned the ability to jump the biggest of dirt jumps and mastering transitions and this year the backflip.

Through her continued marketing and support of sponsors on social media, Jordan had been captured on video at local ride spots and jumps that had brought major a+enJon to the young woman athlete. She is known through out the racing industry as the happy, cute girl, that is constantly at the top of the podium, but now she is making a name for her sponsors and herself in the park and dirt jump market.

She has developed a love for the dirt jumps and the smooth jumps in the skate parks. Jordan is expanding her goals and dreams to represent companies in both the race and free ride venues in bicycling as well as representing her sponsors in events and through media and modeling.

Many consider her to be the perfect storm in bicycling. One who can race BMX, MTB, Road, and Compete in Park and Dirt Jumps. Jordan is an exceptional student. She is currently in High School and is excited to continue her education through college. She has recently taken her skill and athleticism to the sport of Surfing. Recreationally Jordan can be found surfing the west coast beaches as cross training and enjoying the love of the ocean.

Jordan understands and continually looks for ways to give back to her sponsors. She a very active person who can be found supporting her sponsors in her daily life. Whether she skate boards or bikes through her local neighborhood or riding her local tracks and ride spots, she continually tells fellow riders and enthusiast about her goals and her supporting sponsors. When competing at a national event or world championship, she proudly wears her sponsors marketing products as well as handing out decals and media at her pit area. She is proud of the support she has been given and strives to give back to both the sponsor and the fans.

Stoked to take 6th just a second off the podium out here in New Jersey. Had some gnarly crashes in practice trying to learn how to ride the east coast roots in the rain, but luckily the weather held out for finals today! #hyper #hypermtb #snafu #srsuntour #refinedsimplicity #upstream #6dhelmets #suspensionforyourhead #royalracing #7protection #kendamtb #kendatires #hellkat #zulzbagco #realwater #drinkrealwater